Flexible Working – a day one right?

The government has launched a consultation on whether to make flexible working the default position for employees.  This would make it a day one right rather than requiring an employee to have 26 weeks’ service.

It is important however to point out that this does not mean an employee has an automatic right to work flexibly.

The government will also be looking at the eight business reasons that an employer can rely on to reject a flexible working request and whether an employee can make more than one request a year.

Carers will have a new right to have one week of unpaid leave each year to carry out caring responsibilities. It is not clear however when this will become law as the legislation will only be introduced once there is enough parliamentary time.

The leave can be taken to provide care or make arrangements for the provision of care for a dependant who requires long term care and this will include old age.

Current indications are that no evidence or certification requirements to support a request for leave of this nature.

Two recent cases have however held that the failure to hold an appeal did not make the dismissal unfair.  Whilst employers should think very carefully about the risk of not offering an appeal, these cases show that the lack of an appeal is not always fatal.

In one case the employee was a senior board level director, was unrepentant, and showed no signs he would change his behaviour and in the second case, the absence of an appeal did not make a redundancy unfair.  Employers should still exercise caution!

A tribunal has recently held that a decision to require an employee to work full time from the office (when she has previously only attended the office two/three days a week due to her caring responsibilities) amounted to indirect discrimination on the grounds of disability even though the employee herself did not have a disability.

The employer tried to argue that the reason for requiring all managers to be based from the office was so that they could provide on site supervision but the tribunal said this aim was itself discriminatory.

Employers need to be careful how they manage flexible working requests and also this is the first decision where the concept of ‘associative discrimination’ has been held to apply to indirect discrimination in the UK. 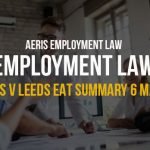 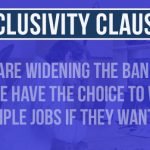